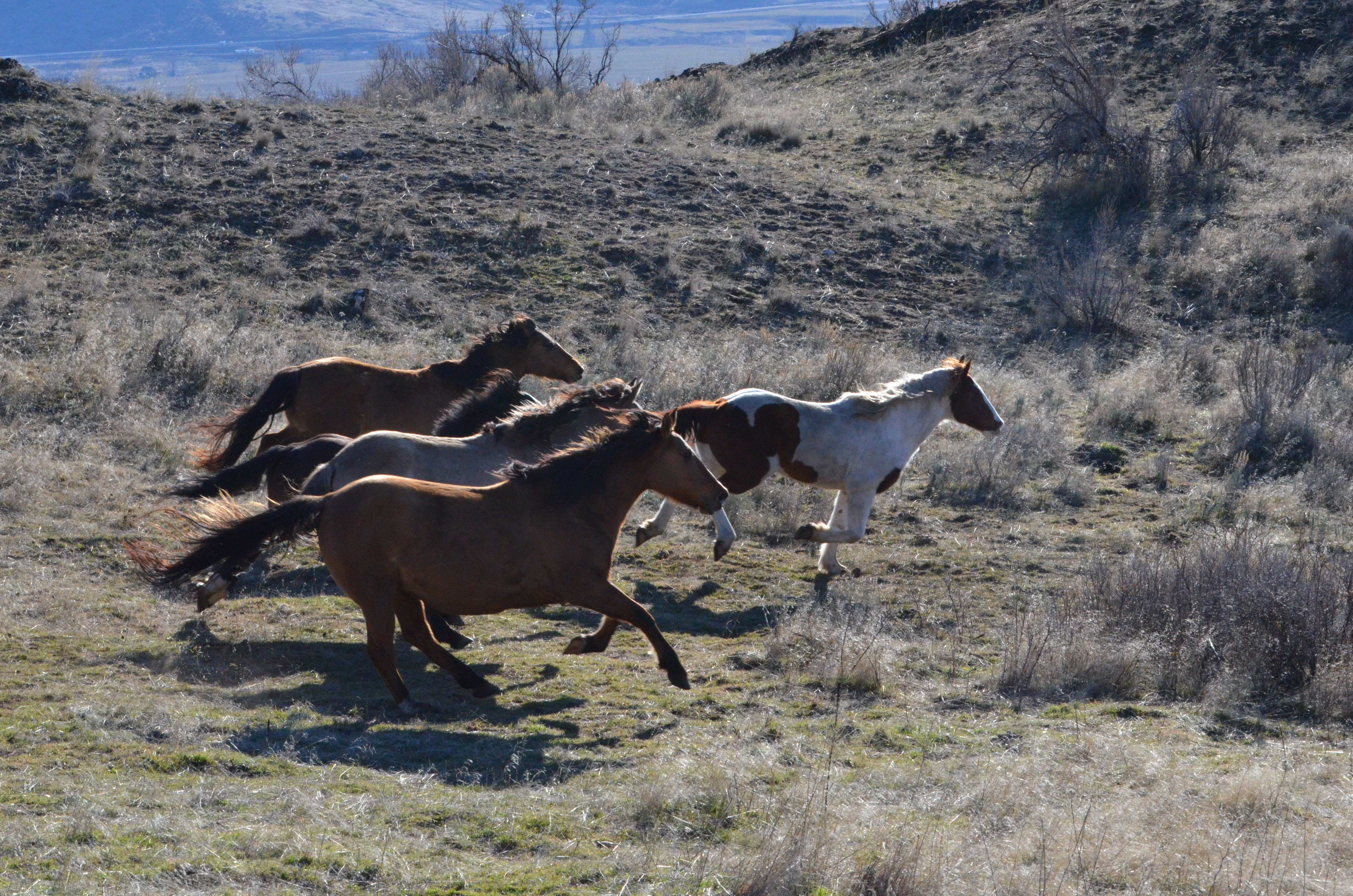 At the only paid gig I ever got for being a reality star, my TV brother Scott and I showed up at a fairgrounds in Western Washington and signed autographs back in 2012. We were like the uncle in a wedding reception line that helped the traffic have someone to talk to before they got to the REAL people they wanted to talk to, the Deadliest Catch guys. I met a pro cowboy there named Brian Waldron, and since the only thing I knew about horses was what I’d recently learned on the Bureau of Land Management website, we talked about the wild-horse program. Brian knew John and Jody Holmes, who are ranchers and owners of one of the wild-horse round-up companies. Brian offered to make an introduction, and that’s how these things start.
‍
Late on a cold January night in 2013, I landed in Salt Lake City, Utah, and headed west toward my round-up rendezvous. Winnemucca is a 3-exit town on I-80 in northern Nevada. Checking into my hotel around midnight I just had time to blink before I met the crew in front of the hotel at 5am, (me in a Ford Fusion rental, the boys in a dusty Dodge crew cab), and we began the drive out to the roundup site. Down one side road after another, we drove deep into ranch country, where the fences didn't seem to have a beginning or an end. I imagined the movie Hidalgo, The Man From Snowy River (based in Australia but whatever) and thought back to all the stories I’d read growing up, romanticizing the cowboy life and the power and beauty of the wild mustang. We were close to the middle of nowhere by sunrise, arriving at the round-up holding facilities.

I went down to the creek to take some nature shots, and had a vulnerable moment when I heard the whir of a helicopter a split second before it zoomed over me and landed on the bluff above the creek. Helicopters are the new version of a sonic cowboy and sheep dog rolled into one tool that can go 80 mph. Without helicopters, the roundups would be nearly impossible. I hitched a ride from Jody to the actual roundup site, down another dusty dirt track a couple of miles from the holding facilities.

The roundup site is simply a burlap-fenced funnel, with a holding pen at the end of it. The helicopter finds the horses based on BLM data, coaxing them in the direction of the roundup site. A trained horse is stationed at the brim of the tunnel, and at a precise moment when the other horses are running toward the funnel, this horse is let go as a leader to the other horses to follow him into the funnel, where the gate is closed. This trained horse is called the “Judas horse”.

The horses are trailered, taken to the holding facility, analyzed for private brands or BLM tags of previous fertility prevention treatments, and then are hauled to long-term holding facilities.

That is the short story.

But the compelling story is a little more complicated. American society is a horse society. The horse allowed early explorers to travel into harsh lands on the backs of a strong and efficient animal. We pushed into the West on the backs of horses. Excepting the last 200 years of history, the world’s fastest means of transportation was on the back of a horse. Americans have an affinity for horses- and when we think about cultural traits of different countries- the French have their wine, the English have their tea, the Japanese have their Samurai- America has its cowboys.

I grew up reading stories about horses and cowboys. We lived next to a cattle ranch and 2 horse ranches. I dreamed of being a cowboy going off into the wilderness on a horse. I read Louis La’amour’s stories of cowboys and their relationships to horses. And I built a certain picture of what horses are. It was definitely romantic, but not inappropriately idyllic.

I read, The Last American Man, about a guy named Eustace Conway, riding his horse across the entire modern United States. How he stopped in the ghettos, and people who had never seen a horse before came out smiling and laughing. These were hardcore, generational ghetto types. And the guy riding was not. A horse bridged the cultural gap.

Because of America’s history, we view wild horses as a symbol. They’ve come to symbolize all sorts of powerful things for us. Freedom. Wild determination. Strength. The mustang is an animal that is revered all over the world for those reasons. We’ve put all sorts of meaning into the plight of the wild horse. I’ve seen them, and they really are beautiful.

But all of this romanticism politely ignores one simple fact. Horses are not indigenous to America. Unlike the Buffalo, which inhabited and migrated through the vast Great Plains, the American Mustang population has grown amidst the rough and wild desert west, where resources are scarce, and much of it is now fenced. As symbols, they are powerful. As work-animals, they made perfect sense. But as wild animals, they are the land equivalent of what carp are to fresh-water lakes. Having no natural predators, herds left unchecked double every 4 years. They eat the resources, they use the water, and they are the dominant animal wherever they roam.

The most recent roundup I photographed took place on an Indian reservation in Colville, central Washington. In talking with the Natives, they mentioned that there wasn’t any game left in the areas where the wild horses were grazing. The grass where the wild horses were running was noticeably more sparse than the field directly adjacent to it, which was fenced and managed with an appropriate amount of animals.

In Washington state, water issues aren’t the same as they are in Nevada. But wild horse populations even effect the fish, this Native told me. As the horses over-graze, it leaves less grass and roots to hold the dirt on the hills. When the rains come, it washes more sediments from the hills into the streams than usual. Spawning salmon lay their eggs in rocks, so they can aerate. The sediment run-off from the hillsides covers the eggs, and negatively effects the hatching salmon.

The wild-horses in this part of Washington are only a couple of generations away from being domesticated. At some point a decade ago, feed prices went up quickly, and many people couldn’t afford their horses anymore, letting them loose on open range. Then they multiplied, and multiplied, until John and Jody’s company was contacted to roundup as many as 1000 horses.

And even though the roundup was decided by popular representatives of the tribe, and the negative aspects of overpopulation of wild horses were objective and clearly quantifiable, it was still a controversial thing.

Over the years, some horses have escaped, some horses have been let loose, but all of those horses have bred. Many of the reasons for these horses being on the range are economic. A great number of horses were let loose around the time of the Great Depression. During WWII, many of the mining companies operating in Arizona and Nevada, who used burros for pack-animals, shut down their precious metal operations. The burros were simply let go, and they now number in the 10s of thousands. Horses take time and energy to train, and as farms increasingly move to gas-power for much of the work horses historically provided, it makes the horse irrelevant.

The economics of the wild-horse management program are staggering, and we are now at an impasse. No one wants to be the one to “dispose” of wild horses. The roundup companies don’t want to, the environmentalists don’t want it, and it would be a suicidal political platform for any politician to make an issue of. But the facts are this.

There is a $60 million dollar budget for the wild-horse program, part of which is used for roundups, part of it is used for long-term holding, and although the law allows for non-commercial disposal of horses that are not adopted within a certain time-frame, that tenet of the law has never been exercised. You can adopt a wild horse for $125; after caring for it for a year, you get title to the animal. At the same time, you can buy domestic papered horses at a livestock auction for $30-$50, with immediate title/ownership. Historically on a percentage scale, well under 1% of horses are adopted out. And there is controversy as to whether wild-horses are actually genetically inferior to papered horses. No horses have been disposed of as of yet, and since their lives in long-term holding are easier than on the range, they are living longer lives. Many of the horses have been in long-term holding for over 30 years. The law requires 3/4 of an acre per animal in holding, and the holding facilities are currently housing over 50,000 animals.

We have reached the critical juncture, where our ideals are meeting a breaking point. And its difficult to not view this politically, as we’re finally reaching this point in so many areas of society. This year, current funding levels have not been enough to continue the roundup of wild horses from the range. So, wild-game is going to be decimated, cattle will have a tougher time.

Someone is going to have to make a tough decision. If there’s only so much money to go around, do we allocate more money for horse programs if it means less for people programs?

There are essentially three alternatives:
1) Keep things as they are, doing minimal roundups, and maintaining holding facilities. This will negatively impact cattle, wild-game, water and soil.
2) Allocate more funding, for more roundups and more long-term horse facilities. Potentially revamp sterilization procedures.
3) Treat wild-horses as a commercial entity, such as cattle or pigs. The proceeds could help augment funds allocated for the horse program.

Those are the only three options.

Number two is possible. This is based on a reallocation of resources. The program will continue to cost more and more money, since horses breed, regardless of politics or policies.

From a purely pragmatic standpoint, number three sounds reasonable. I don’t like killing things, but I’m not vegetarian, so apparently I’m fine with cows and pigs being slaughtered for my subsistence. Contextually, America is actually one of the only societies where its culturally taboo to eat horses- though we eat venison, moose, ostrich, and the normal staples like beef, pig, chicken, etc.

The problem is, I’ve looked in their eyes. I’ve seen them running wild, and seen them in holding pens, and I can tell you, no one likes having to put them there.

Regardless of sentiments however, there are still only three options. Because of the nature of wild-horses to the psyche of Americans, I think a valid question to ask ourselves, is this:

“What do we do when our symbols are running amuck?”