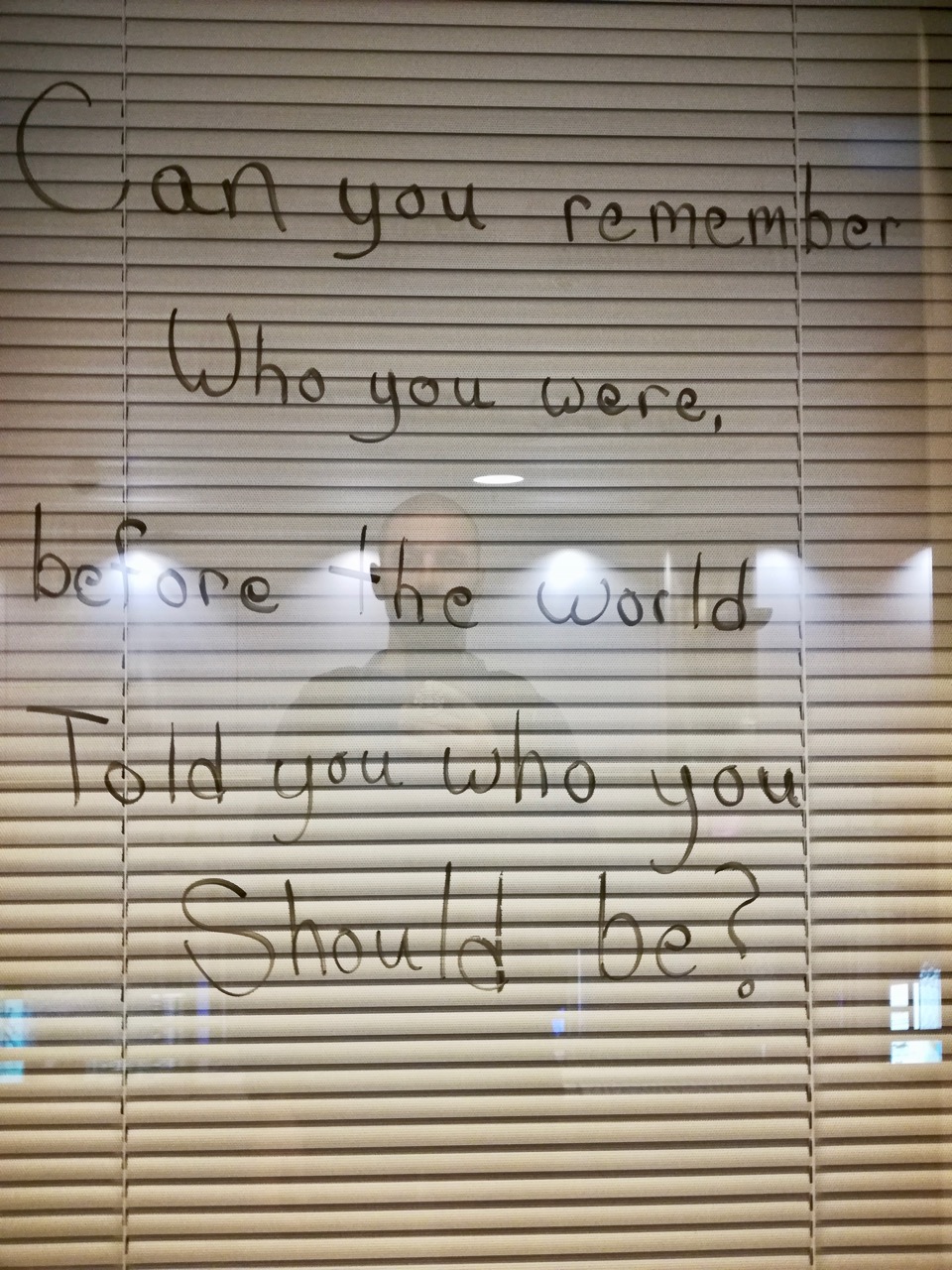 I was in the upstairs mezzanine of the Anchorage Airport for another over night, when I saw somebody’s thought dry-erase marker-ed on a TSA office window. Which is weird cuz I haven’t gotten a big humor-vibe from TSA organizationally lately- but thats another essay topic.

The quote took me back in the way these things do.

When I was 16 and 3/4, I smoked my first cigarette. Three months later, I dropped acid.

I’ve since facilitated substance-abuse groups, and the story of my fall wasn’t long or even all that dramatic comparatively to some of the stories I heard there. But I knew I couldn’t quit on my own once it started. I quickly realized that everything was going down fast, and so I asked for help.

One thing led to another, and I ended up in a program for troubled teens when I was 17. I chose to go there. I’m not aware of any other kid while I was there that chose to go to Paradise Cove, Western Samoa.

One of the processes the program had was emotional growth seminars. We were sworn to secrecy about what goes on in them. The facilitators took on a guru type air, and they exercised complete control. They did this in a similar way that all dominance hierarchies are established. There was posturing, there was logical reasoning, there were philosophical principles none of use understood completely at the time, and there was always the threat of force lingering in the background if a kid got unruly. If you didn’t pass through the seminar, you would have a Category 2 rule violation and have to write a 1000 word essay on what you did wrong and what you learned from it. To write the essay, you would sit cross-legged in one of the huts where we lived, and you would balance a notebook on your knees while you were writing. If you didn’t get it done in an hour, you would start a new essay and stay on task to finish it.

But one of the processes within the seminars involved letting go of the emotional baggage we felt from guilt, the wrongs we’d done, and the people we had wronged. It involved feeling the weight of all the metaphorical rocks we’d placed in our metaphorical backpacks, and letting it go. I took it seriously. And although I had no control over where I was- I trusted the process completely. It was the closest thing to a cult experience I’ve ever had, and while I know kids that had very negative experiences going through the same processes I did, the fact is that those kids going through those processes WEREN’T going through the same processes I was.

At the end of this specific activity, we were led on a guided meditation where we looked back at the earliest self we can remember. And then to go back even further to the first self that existed before anything else happened to us. This first person, not in tense but in existence, was our “magical child.” And we were encouraged to imagine holding the ‘us’ before all the muck started. Before we were acted upon and acted upon others in ways that changed us for the worse. What were we like? What did we believe about ourselves? What did we hope for? What made us smile? How did we love? What did we dream of?

And we were encouraged to incorporate this “magical child’s” outlook on life.

Both emotional growth seminars I went to had this theme as the showcase event of three days of early mornings and late nights. By the time we were done, we were exhausted but exhilarated- like dogs who’ve been allowed to run all afternoon.

I’ve spent my entire adult life with this concept in the background. What is the type of person I was meant to be before any fear or inhibition began? How do I become more like that? We love stories of noble people who do extraordinary things, but the essence of what any individual progress means, is actually a re-centering back to one’s original self, not a journey to someone else. A re-emergence of one’s “magical child.”