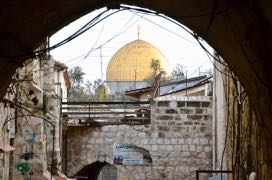 As attack after attack is wrought, both on our soil and the soil of our neighbors and friends across the globe, and as these attacks are clearly linked to terrorists with some sort of affiliation with Islam, it makes a person wonder what about Islam makes this possible? Why can a branch of Islam justify this sort of thing?

The answer, is that Islam doesn't justify this sort of thing, in the same way that Christianity didn't justify the way Christians took Jerusalem, raping, and killing women and children, and calling that "God's will.” The “Dark Ages” weren’t fueled by Jesus’ teachings, they were fueled by an oppressive religious/political monopoly. And ironically, there was a time when Islam was the center of enlightenment in a very dark world.

I have a lot of friends who are religiously jaded. I have my moments. They think because a religion can spurn someone to do something irrational, then the religion should be thrown out. Well, if I used that logic, then all sorts of things follow suit. All kinds of love. Pursuit of the arts. This blog. There's a fine line between madness and possibility, and the word "faith" is somewhere in-between.

The short answer to the terrorists, is that in the same way Christianity has its sects, so does Islam. And in the same way that Christians have literally 1000s of different churches, all using the bible but disagreeing about the specifics, Islam has that too. In fact, though we assume the world is as connected as we are, much of Islam is still living in the 3rd world. Because of this, information dissemination, and faith, is under a more strict control and observance.

I had an interesting conversation with a friend of mine that was working at the US embassy in Jordan. In America, as we've become more prosperous, religiosity goes down. But the opposite is true in many Muslim countries. As people become more wealthy, they become more traditional. He said over the last 10 years, women in Jordan have had to begin wearing head-coverings as a result of religious/political pressures. There have been more “honor” killings. In other Islamic countries, with oil money and finance markets giving citizens of UAE six-figure incomes simply for being Emiratis, what is a person to do with their time? Many become more externally devout. I have no way to gauge the actual spirituality of other people. It would probably be a simple questionnaire if I were to try to measure it. "How often do you do unto others as you would have done unto you?" I think that would be the only question on my spiritual questionnaire. But, back to radicality.

Islam is going through a revolution in the same way we are going through a revolution of ideology and values in America, (ahem, Christianity?). It is alarming, and exciting. How long do you suppose Iranians and North Koreans are going to be able to lack full access to the internet, and a view of what a peaceful world looks like? For all of our perceived problems, much of our current election cycle hype is simply coming from the fact that we're bored.

People don't want to come to America to take advantage of us, they want to come here because even with all our problems, we have recourse with the law. There aren’t many residential homes with bars in the windows. I know there are some pocket exceptions, and the media blows those up as if those exceptions are the rule- but if you look at the amount of military, police, and beaurocratic authority that could take control of our lives in some way or another and doesn't- America is a miracle. I cite history as my reference.

I remember crossing the border into Tanzania a couple years ago. The desk clerk had us all put $50 US in our passports, gathered them up, and went to a back office. We all had to put the money in the passports, and no receipt was offered. He came back a long time later with all of our passports, but with two of them he said, "We need $50 from you." What followed was a maddening illustration of having no recourse with the law. There was nothing this couple could do. They argued. We couldn't say we'd seen it. We were all in a foreign country, at a border crossing, at 7am. Who would we tell?

They paid the money.

I've seen countless situations like that play out, from getting bilked by Mexican police with Uzis in Tijuana, to beaurocratic buy-offs in India- America is a place where the system is fair and just, generally speaking. Again, I know there are exceptions, but they are exceptions. The reason many of the problems in America seem so prevalent is because Kumbayah doesn’t make for good press. There are exactly zero movies about people getting along the entire time. Crisis makes for a good story, even when its a distorted perception.

I’ve had some beautiful and generous experiences at the hands of Muslims I’ve met over the course of my travels. It is clear, that regardless of their beliefs of where Christianity is going to lead me in the afterlife, they are attempting to live a principle-centered life during THIS life.

There are some dangerous people in the world, and these are tough issues. Ask any veteran that has been deployed. It is difficult for many to explain their experiences, and its understandable. I certainly can’t explain it all. But when we look at what the issue is, there is a definite distinction between “radicals,” and Islam itself. And in the same way simply being "Born in the U.S.A" (Springstein, 1981) puts us in the upper echelons of any homo sapiens that have ever lived on this earth, the kids born in Syria have precisely the opposite birth luck; and in the same way we of the developed world can't take credit for the luck of our parents getting lucky, neither can those in the war-torn middle-east be faulted for the dismal circumstances surrounding their unchosen entrance into this world.

Albert Einstein said that “Peace cannot be kept by force. It can only be achieved by understanding.” Albert was an idealist. And though he said that and believed it, it took a very violent hand to put an end to WWII with all its awful realities and possibilities. “Understanding” sometimes means having a big stick available. Wisdom is in knowing that a big stick isn’t your only weapon.