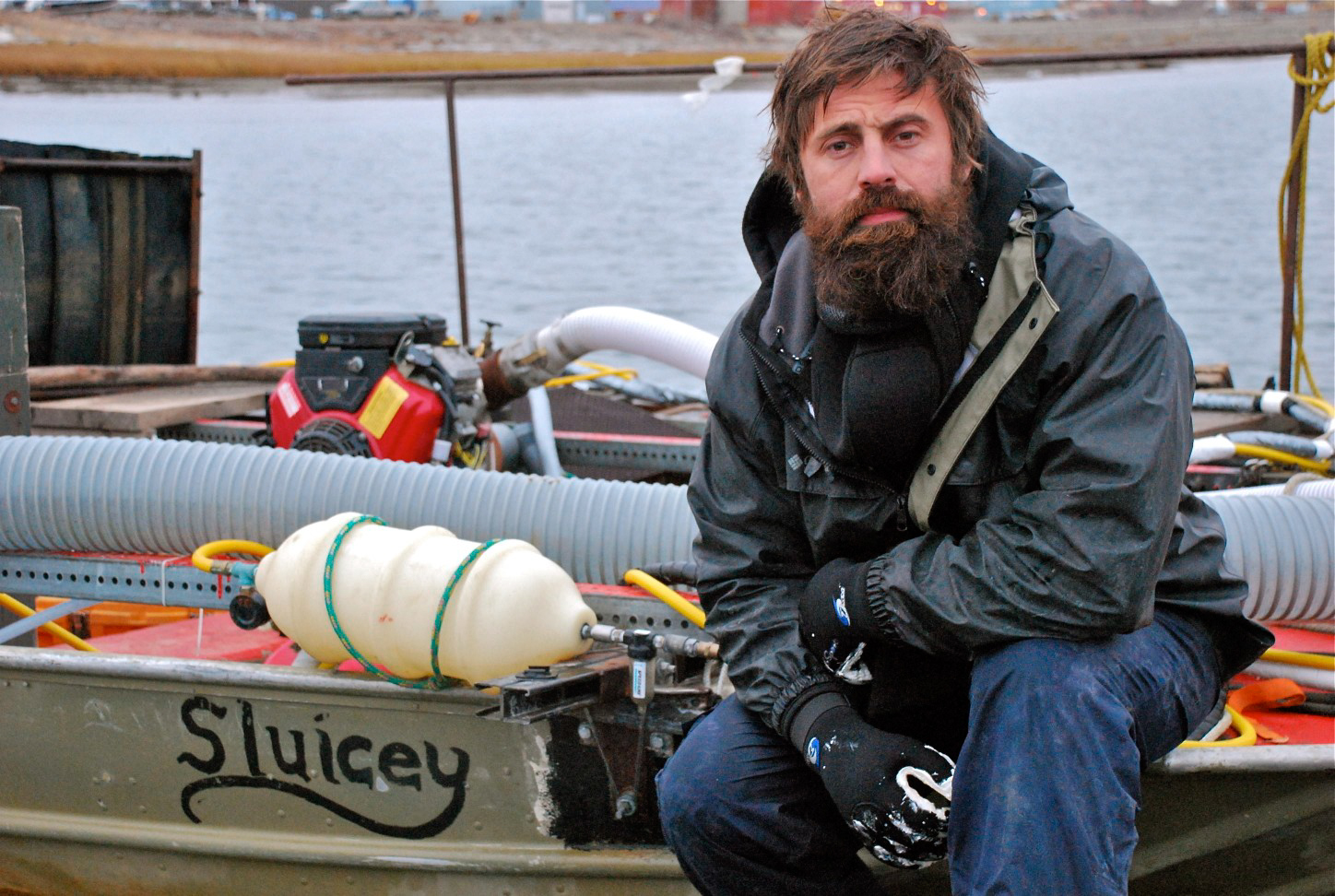 I was awakened at 430am, with the wrong voice in the bunk-house. Jordon was supposed to be out on the boat. Shift change happened at 2am, I was supposed to wake up at 630am to get underwater by 8am for the next shift change. I got up to investigate.

We were supposed to have a strong Northwest, turning to West-North-West, turning to West later in the day. I knew it was supposed to get strong, but my business revolves around the crystal ball of foreseeing what Mother Nature has up her sleeve, and generally speaking, if you don’t have an aggressive attitude, you won’t get out very often. In gold-diving in the Bering Sea, you have to look for reasons to get wet, not reasons why the weather won’t cooperate.

So, my guys were out at 2am, and the wind had picked up early. The waves were bigger than expected, and we are starting to have dark night now, instead of the fleeting twilight as the sun dips down and back up from the horizon. Something eery about the waves and wind getting bigger and not being able to see into the distance. On the way out, the skiff was tossed around by large swells, at one point throwing both my diver and my dive-tender from one side of the skiff to the other as they got hit by a wave they couldn’t see.

We (I) feel so important most of the time. Like death isn’t real. Like I’m immortal. There is nothing I’ve found that is so humbling or impersonal as being alone on the dark ocean. It makes you perfectly aware of your mortality. And believe me, you think about your mortality up here.

My diver, Scott, hadn’t known what was happening on the surface. The suction hose acts like a big, snake-like shock-absorber, and takes all of the wave action out of the hose from the surface. So Scott knew the waves were picking up, but didn’t know how bad until he got to the surface, and could barely use the ladder due to its severe undulations on the water. They got the hose out of the water, which is like wrestling a 500 pound earth-worm suffering from rigor-mortis. Jordon, my dive-tender, ended up swinging out on the rear pulley, walking on the hose in 4 foot swells, and attaching the hook to the hose so we could winch it up.

The dark ride out to the dredge boat. The swinging out and walking on the floating hose in water that could make a person hypothermic. I’m supposed to sleep while all this high-stakes is happening. And we all LOVE this stuff. Its sketchy and crazy. And my crew and I, we’re all riding on the edge of the white lighting razor of crazy.  Its difficult to describe the congeniality of a crew of dudes that lives and works in close quarters, that shares all its triumphs and disasters, with an “anything goes” attitude. The freedom of a bunch of dudes giving 100%, with nothing to lose, is engergizing/inspiring/choose-your-adjectivilizing.

This whole experience has become my life. I’m a professional gold-diver on the Bering Sea. There are no certifications. It just happened somewhere along the way. There is very little applicability or transferability of skill-set from this job to anything else. I walk around the world as if I’m a recently pregnant woman with a little secret she hasn’t told anyone yet. I’m a dredger.

And now, I’m a dredger that's tired. Its 730am, I got 3 hours sleep last night, and the extended forecast looks like we’re going to be off the water for awhile. But, I’m going to walk down to the water and look at it. I like feeling the wind on my face, and staring out at the storming ocean from the safety of firm ground. And frankly, I like feeling the storm under my feet, when I’ve stayed out too long and the waves are getting bigger than I want my dredge to handle. There are real stakes, at that moment. This isn’t #adventure. This is real life. And its precisely the reason I don’t Instagram those moments. I shouldn’t even be blogging about them. If you’ve never worked at something precarious until your eyes are stuck open, but your body is screaming for horizontal- the satisfaction isn’t something you’ll understand. If you haven’t, do us all a favor, and do it. The world needs more people that have experienced real stakes. I know it sounds cheesy and cliche and like some script out of a movie. The guy stands by the water, looking out epically toward the horizon as the stormy waves throw sea mist, crashing upon the rocks. Thinking of endless possibilities…. But that is precisely the feeling, and it feels as real as anything I know.

And now I’ll sleep without an alarm clock.