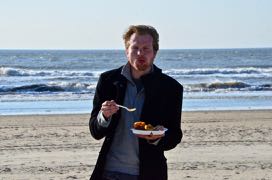 A veteran of countless culture classes, given at the hands of churches, non-profits, tribes and states, I can tell you that nothing can prepare you for first contact. For that first feel of 80 degree humidity at midnight. For no English speakers in sight. For people breathing on the back or your neck in line. For being the only person on a crowded bus that wears deodorant. Nothing.

Being as experienced as I am (said with no little amount of smugness), and having plenty of stamps under my passport’s belt, I entered South Africa a few years ago and attended a rough diamond evaluation course at the Diamond Center in Johannesburg. I met a Zulu prince named Eugene, who was by far the most entertaining member of the class. I didn’t know how to place him. But he carried himself like a rock-star, obviously had means, and half of the purpose of the class was to network, so that’s what I did.

I remember walking out to lunch one day in between classes as four beautiful, strong, perfectly bald black men, with big sun-glasses, plenty of jewelry and even more attitude, stepped out of a Mercedes and a Range Rover. The leader looked at his compatriots, nodded once they were all out of the cars, and began walking across the parking lot to the building with nothing in his hands. His second in command followed closely behind carrying a briefcase, and the two behind carried automatic rifles, looking either way as they held up the rear-gaurd. My classmates and I all sunk into the nearest cover just in case a fire-fight erupted. They looked like a cross between Miami Vice and Blood Diamond, but they were all business and they knew their business.

On day 6 of the two week course, this Zulu prince and I ate lunch at a Kentucky Fried Chicken type establishment that was on the bottom-floor of the building. I ordered the fried chicken, which came with a salad, mash bananas, and some other “cultural” foods I can’t remember. His dish had a sausage, pork-chop and chips.

Now, growing up in the country, we didn’t learn a whole lot about etiquette. Not that we didn’t have it, but we didn’t complicate the food-to-mouth process with unnecessary things like, silverware, when pizza was clearly meant to be eaten with your hands. Fried chicken was also clearly a hand-to-mouth food.

But here I was, “networking” with a potential business partner in a foreign land. When in Rome, do as the Romans do. So, he used a fork and knife, and I followed suit. Civilized men, these South Africans. And I painstakingly carved the meat off the bone of my chicken breast and thigh. Why hadn’t I ordered a simple sausage and pork-chop like this African? It was laborious, and took actual mental effort. But, I had respected culture, I had observed what the locals did, and had done it. I had become acculturated. We finished, and walked back up to class for more rough grading exercises.

Fast forward to the last day. Eugene had offered to host me that evening at his home. He planned a barbecue and dinner with he and his wife, and offered to have me stay the night- teaching me about hospitality. His house was a home, and his home was beautiful. Clean and contemporary lines, marble floors and counters, stone steps, open floor plan, he even had a retractable door so he could watch the TV in his living room while he was barbecuing outside. He had a small, lawn-level pool in the backyard, perfectly framed in his perfectly manicured landscaping.

Dinner was served, and it was a feast. His wonderful wife brought plate after plate of potatoes and salads and bananas, along with the meats we had cooked. We said a prayer over the food, and then Eugene’s wife asked me,

Would I like some silverware? Why wouldn’t I? How else would I eat it?

“What are you going to use?” I asked, still wanting to respect culture, but realizing my culture lesson from earlier was likely out the window.

They smiled back. We washed our hands, and then dug in.

A few minutes into the meal, I couldn’t help but laugh, and Eugene and his wife asked me what was funny. I thanked them for the beautiful meal, and then explained my predicament from earlier in the week.

“I’ve traveled all over, and so I observe the customs and try to mirror them. Eugene ate with silverware at our lunch, and so I did also. But chicken is SO HARD to eat with a fork!”

Humor takes a minute to translate, but they looked at each other, looked at all of our greasy hands, and getting it, began laughing.

“I ate with a fork and knife because you look like a savage if you just grab a chop and start eating it….” Eugene laughed.

The lesson learned here is that finger food where you grew up is usually finger-food in other places too. Except when its not.