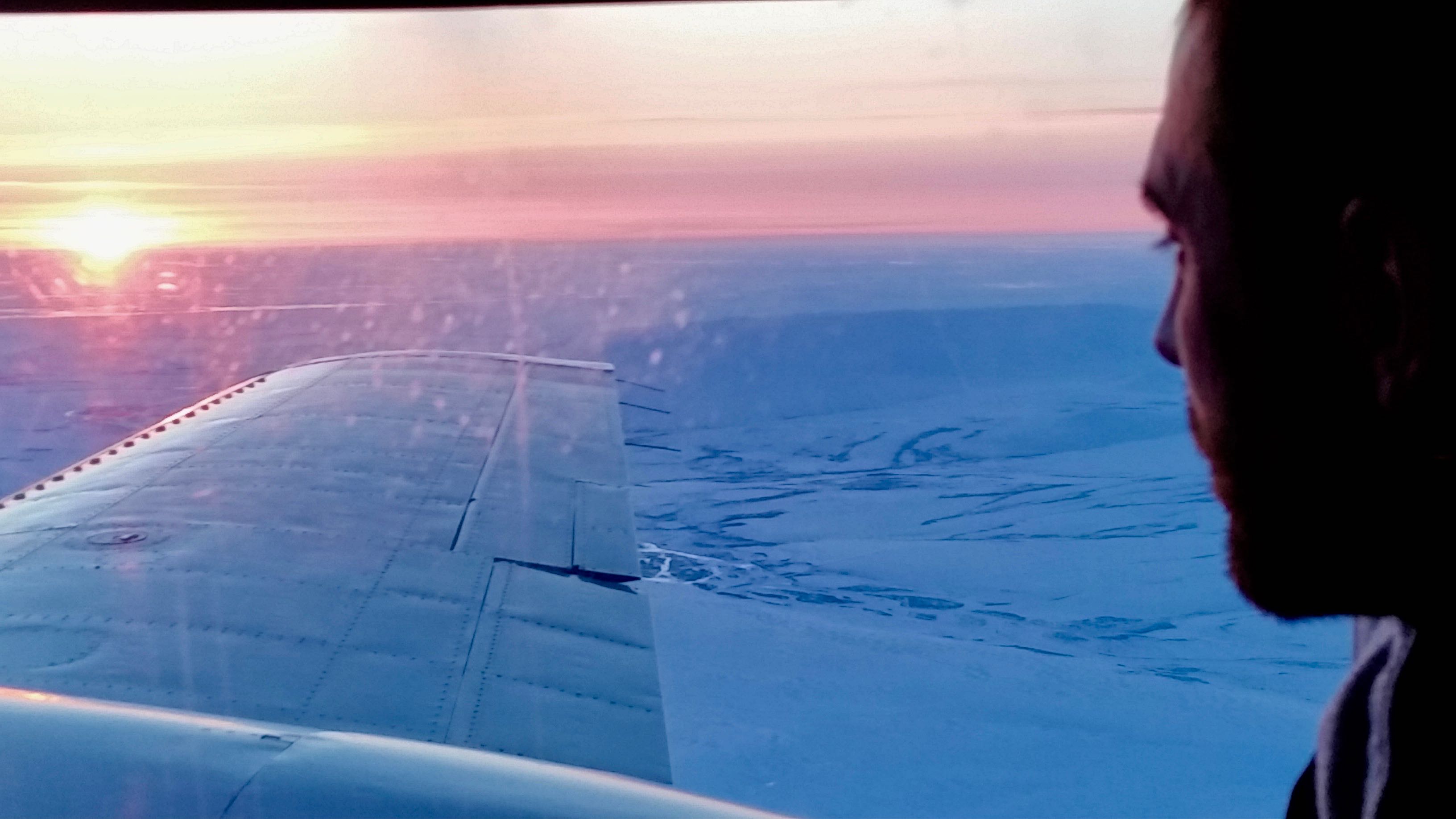 A Day in the Bush

Nome is a hub to which people come for higher level medical care, and from which flows food and goods from the outside world to the surrounding villages. There are no roads to Nome, and Teller is the only village connected by a road to Nome. The isolation is complete. When weather is bad, it can be days or weeks before a village will have any transportation in or out. Internet works like an optimistic friend giving advice they know won’t be taken. This life in bush Alaska.

I recently took a day trip to Wales, which is a rare village that gets 3 flights per day. I arrived at Bering Air and checked in, saying hello to the desk agent whom I know personally, and watched her hand my checked bag to my other friend whom I know personally. The pilot came into the waiting area 30 minutes later and called, “Brevig, Wales, Shishmaref.” I quickly took off my -40 rated snow boots, put my snow pants on, put my neck gator and beanie on, zipped up my jacket, and followed the pilot and other passengers as we stepped out into 15 degree weather, and walked the short distance to our small 12-seater plane.

I can’t seem to stay awake on planes and so shortly after take-off I was fast asleep, waking as we touched down on the dirt airstrip in Brevig Mission a half hour later. In that half-hour, the small plane just had time to warm up before the door opened again, and the cabin was filled with cold Arctic air, which was colder than when we’d left Nome. After a quick exchange of passengers, mail, and cargo, we took off again, this time heading toward Russia.

Wales is the closest village in the contiguous US to Russia. On moderately clear days, you can see Russia from your house if you live in Wales. As we flew closer, the coast appeared suddenly, and then Little Diomede (an island in the middle of the Bering Strait), and 2 miles from that, Big Diomede, and then mainland Russia came into view in the distance. The sea-ice hasn’t formed thick enough for an air runway in about 4 years, so the only means of transport from Little Diomede to the mainland is helicopter, or boat.

Genetically, there is very little difference from the indigenous people in the US and Russian sides of the Bering Straits. They speak a similar native dialect, Yupik. But the white people are different in each place, which has made the politics develop differently, which in turn effects the culture.

Wales is a small village on the coast, and we land and taxi on the dirt airstrip. I begin walking from the airstrip, and a Native stops next to me on his snow-machine (snow-mobile), pulling a sled behind and asks, “Wanna ride?” He puts his passenger who was riding on the backseat in the sled, and I hop on the back, and off we go.

Wales is colder than Nome today. Its somewhere around 5 degrees, and our man-made wind-chill makes me pull my neck-gator up over my nose and squint. The driver asks me where I’m going, and when I tell him he says, “Good, I live next-door.” There is no defined trail in the winter time, and we drive over the open field, and then between buildings, and then to the beach, where I see the metal honey-bucket dumpsters placed ever-so-often to receive Wales’ human waste. There is no running water here. There is no indoor septic. We pull up to the person’s home, I say thank you, and as I turn to go, a lady walks out of the house and asks, “Do you like to buy beadwork?”

“I don’t know if I have any money,” I reply, but I rummage through my bag anyway. Finding none, I ask what she has to offer. She invites me into her home, which has pictures and posters pasted on every available space of wall. She shows me a beautiful glass ball, with a bead-work net around it. It is hanging from the window, and she explains that if you “charge” the prisms with salt-water and moonlight, they will be extraordinarily shiny.

I ask about the ball, and she explains that it was store-bought from Amazon, but she has some Japanese glass balls that have actual Japanese characters on them. I ask if she ever lets people commission a bead-work piece, and she says yes. I begin to describe what I would like. Japanese ball, tighter net, different colors, but I tell her I don’t want to be too specific with her- nothing worse than an assembly line artist.

“How much would that piece be?” I ask.

And I can’t help but counter-offer in her favor.

“I’m going to give this to my girl-friend, and I want it to be special. How about I give you $90, since you’re going to take extra time on it.” I say.

“Okay,” she agrees, with a barely discernible up-tick in emotion. We make arrangements for transport, and I go and conduct my home-visit.

I spoke with a Native Alaskan elder and his wife, who I can only describe as an adorable grandmother. Ever so often he would interrupt the official business I was conducting, and I would listen to stories of the things he’d seen. He worked in a local mine, was a veteran that saw action in Korea, and had other stories of life in his village. Whaling to seal-hunting to survival in the winter. There are times when conducting business in a place that isn’t impressed by “business”, that the rush of getting things done actually gets in the way of the way things get done here. Luckily, I had plenty of time, (time?), and so was able to listen, asking a question or two, and then steering it back to the business.

In discussing his supervision of the grandchildren in his home, this elder mentions to me that he usually lets them play out whenever they like, unless there is a polar bear in town, then he doesn’t let them play outside. He looks at me without any emotion on his face. I know enough of Native Alaskan humor to know this is a sarcastic joke, but it is delivered with a poker face of sensibility. I can’t help but laugh at this matter-of-fact-solution to a neighborhood parenting issue.

I begin walking back to the airstrip, which is about a mile away.

Its a glorious day. Clear, cold, but the sun is shining and so its as warm as 5 degrees can be. There is little wind in this notoriously windy part of the world. The sea-ice extends as far as I can see toward Russia. And ever so often, I look around me for stalking Polar Bears. Seriously.

I never walk, and so I’m enjoying the feel of slow and deliberate movement, when a kid on a run-down 4-wheeler detours on his route back to town and asks me if I’d like a ride back to the airport.
I generally don’t turn down offered cookies or rides, regardless of my diet or direction, so I hop on side-saddle and he gives me a short ride to the airport. We begin a conversation that lasts until the plane comes.

I ask him about life in Wales, next to the bottle neck between two of the world’s seas. He tells me about the changes they’re experiencing in the weather, the temperature, the fish and the wildlife. Climate change affects their food-source. He begins to speak about corporate greed, and I redirect to a conversation about responsible resource development. Everything requires mining, but it has to happen the right way.

I ask permission to record his voice. We are in a conversation that is less about words than about feel. I’m enjoying the sound of his voice, the unique cadence of the Native Alaskan accent and word structure. Even when he’s explaining something important, there is only a slight uptick in emotion. He allows me to speak, and listens intently, and then waits before he speaks. He hears me. I do my best to also listen to his world which I have so much more to learn about. I do my best to not get in my own way as I learn about a whole other culture, that has different values and priorities.

My plane comes, and my new friend leaves. I watch him go, the tires of his 4-wheeler balding and half-full. I look at the plane, which after leaving me 4 hours on the ground, has returned to take me home. I’ve experienced a whole other world, but it hasn’t become a part of me. I’m simply a visitor here.

The sun is setting as we climb higher and we pull away from the coast. I spend much of the time trying to frame the wing-tip with the sunset just-so in my DSLR camera, and anything else worth shooting in the landscape- a pretty first-worldly problem, but my mind is deep in the 3rd world of bush Alaska. Questions of entitlement, of birth-lottos, of patience and persistence, economics and subsistence. It fills my soul with depth and breadth and questions that only staying here seems to be able to answer. At times I can’t take any pictures, I can only stare off into the barren Alaskan arctic and wonder.